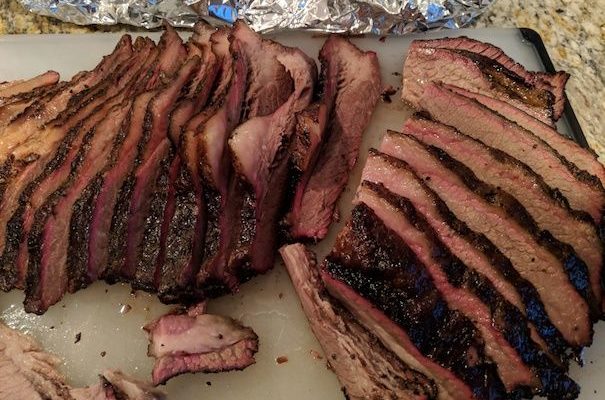 Video Walkthrough of this Recipe

Unfortunately, I have never been to Texas.  I am dying to go and taste all the wonderful BBQ down there. Until I do get there I just have to look at pictures and videos of their awesome food and try my best to replicate it.

I recently bought a few products from Crowd Cow and have found they offer some great stuff.  You buy the portions of the cow you want from area ranches and I have found the meats are really incredible.

You can check it out HERE.

So in early December I got an email from them about a ranch offering ancient grain fed, something finished, a whole lot of I have no idea.  Anyway it sounded good so I bought a Whole Packer Brisket from them.  Other meat I have gotten has been so good I figured why not.

When the brisket arrived it was beautiful.  Smaller than I would like at 10.5 lbs but so well marbled.  This looked very similar to an Australian Wagyu brisket I cooked a while back.  Anyway I figured if this brisket looks this good and I want to truly cook it Texas Style then I need some Post Oak from Texas.  I found a place online to ship it to me and I was ready to go.

The recipe for Texas Style Brisket is easy.  For this I trimmed my brisket but not like we do for competition.  The fat cap was pretty thin so I left it alone.  I trimmed the deckle and took off some of the fat and silverskin from the underside.  Then I mixed Kosher Salt and Coarse Black pepper together at a 50/50 ratio and gave the brisket a good coating. 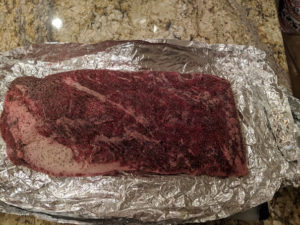 While the brisket hung out on the counter coming up to room temperature I fired up my Big Green Egg. Now the day I chose to cook this thing overnight was the coldest day in the Philadelphia area in 24 years. I cooked overnight and the overnight low was -1℉.

Once the egg was fired up I threw 3 fist sized chunks of Post Oak (if you cannot obtain post oak use whatever oak is available in your area or pecan wood). 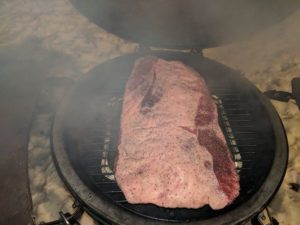 I put a water pan on top of my plate setter and closed the lid.  I adjusted my damper and daisy wheel to get the egg to settle at about 275℉.  Once my smoke settled down to a thin blue I put the brisket on fat cap up.  This is always a big debate but if everyone says for Texas Style to do it fat side up; that’s what I was going to do.

After about 5 hours the Big Green Egg was humming along nicely and had not budged off of that 275℉. When I opened the lid I found a nice mahogany colored brisket that was ready to be wrapped.  For this brisket I used pink butcher paper. 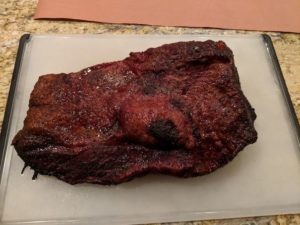 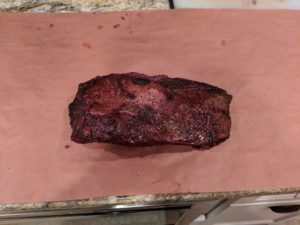 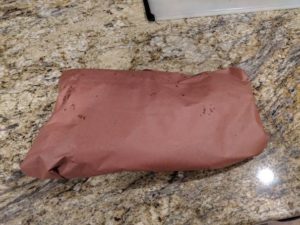 You can find the one I used HERE.

You just wrap the same way you would with foil but the butcher paper does not lock in as much moisture however it will still stop the smoke buildup on your bark.  Again, not my normal practice but this is how it is supposed to be done.  After a wrapping with a double layer I flip it so the fat cap is still up, put a temperature probe in and back on the egg.  I am shooting for 205℉ internal temperature but really we want to go by feel.

Around 11 am I was hitting 195 on the internal temp so I decided to probe it a little.  This brisket was taking a long time but it’s done when it’s done, right?  After probing with my Javelin it was soft in some areas but still a little tough in others.

I let it go almost another hour and that led to meat perfection.  Internal was between 200 and 205 and the thermometer moved through it like butter.  I unwrapped the butcher paper and let the steam off. This is not totally necessary but I re-wrapped in foil before putting in my dry cooler to rest.  I didn’t want drippings in my cooler for another thing to clean.

Anyway let this thing rest for at least an hour so the juices are reabsorbed.  I let it go almost 3 hours and it was still so hot I needed gloves with liners to pick it up.

At this point it’s time to slice it down.  I started at the flat and cut pencil thick slices across the grain. Once I got to the point I spun it around and cut slightly thicker slices.  This thing was amazing.  It was so juicy and so tasty. 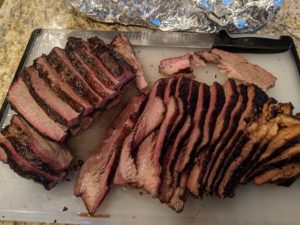 The amount of smoke was perfect and I could not get over the flavor.  I guess it’s true that a great piece of meat just needs some salt and pepper with a little touch of smoke.  Check out the video on this to see the process.  And by the way, a testament to how awesome the Big Green Egg is.

That thing ran on one load of lump charcoal for over 12 hours and held 275 the whole way.